Piezoelectric damping of vibrations for cars 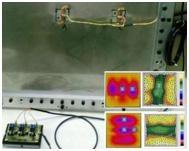 ATCP has provided specialized services for the automotive industry with a view to damping vibrations in cars using tuned piezoelectric elements. The services consisted in dimensioning and fixing piezoelectric elements, besides calculating and developing synthetic inductors for high inductances (> 1 Henry). Obs.: synthetic inductors are electric circuits.

The position for fixing the piezoelectric elements was determined by the customer as a function of vibration modes they wanted to mitigate and through simulation by the finite element (FEM). The simulations were refined with the characterization of the modules of elasticity (Young's modulus, shear and Poisson's ratio) of the materials involved by using the Sonelastic® Solutions.

The damping provided by the piezoelectric elements was characterized by modal analysis and was superior to that obtained with only passive elements.