Preload is the traction force created on the transducers’ bolt by elastic elongation due to the application of torque and threading. Prestress is the mean static stress in the piezoceramics and is equal to the bolt traction force divided by the rings’ cross-section area. Prestressing aims to maximize simultaneously the maximum power and effective contact area between the transducers’ elements, besides avoiding displacements during operation.

The optimum prestress depends on the piezoelectric material compression strength and static pressure distribution on the rings. Usually, the static pressure is maximum at the inner edge, close to the bolt, and decreases with circular symmetry towards the outer edge. The typical optimum prestress values are 45 MPa for the PZT-8 and 35 MPa for the PZT-4, as shown on table 1 above. Unlike optimum prestress, the torque varies according to the piezoceramics cross-section area, bolt dimensions and friction coefficients. It is worth mentioning that that friction coefficients are highly sensitive to surface finishing, cleanness and lubrification. 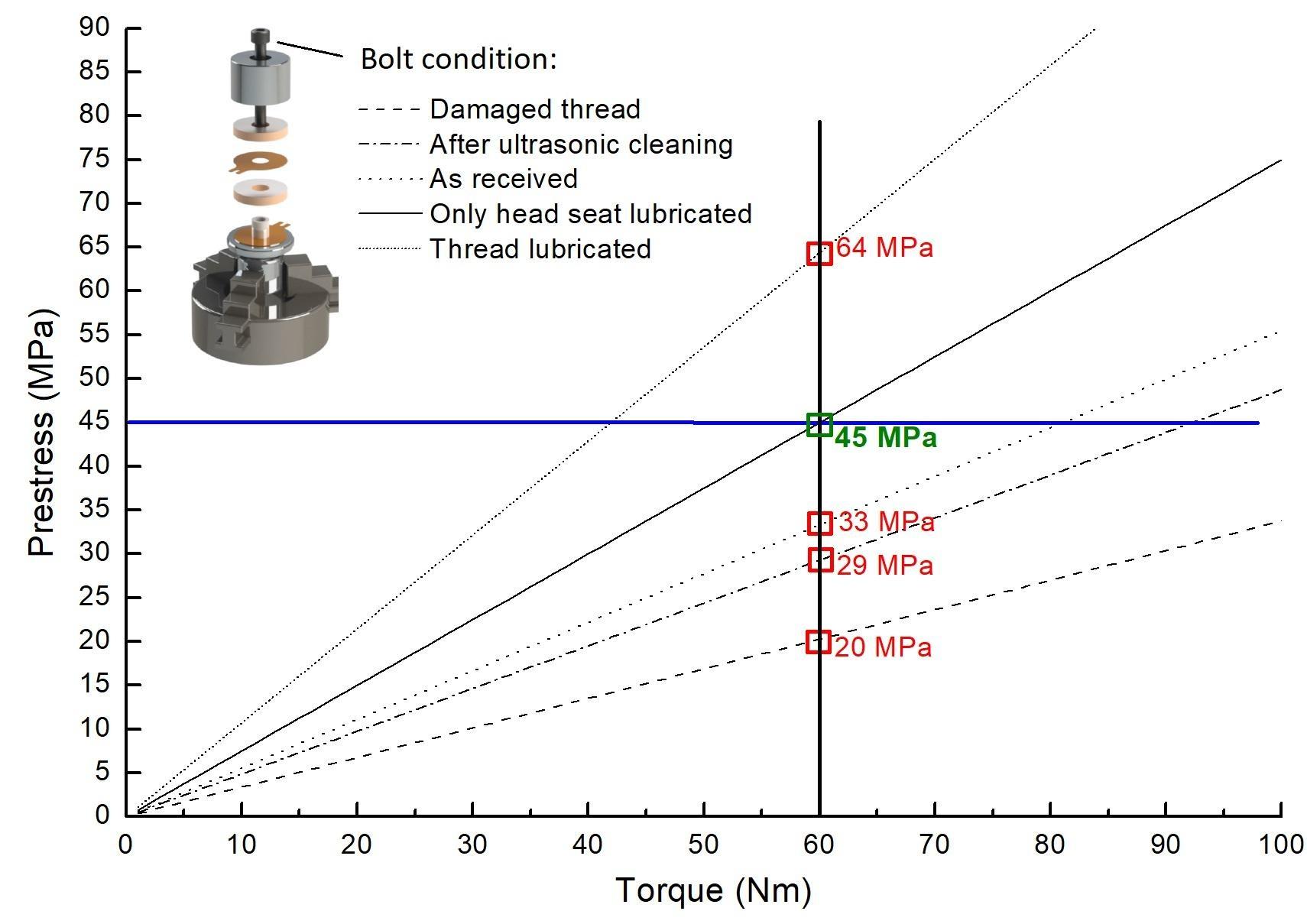 Prestress and torque are proportional; however, the proportionality varies greatly depending on the surface finishing, cleanliness and lubrification.

Prestress control is critical and determinant for lifespan, maximum operating power and efficiency of ultrasonic transducers and converters. Prestress in excess changes the piezoelectric material properties and may cause crushing, whilst insufficient prestress allows lateral displacement of the ceramics in high power, leading to cracks, electric arcs and short circuits.

PiezoClamping® employs an innovative technology developed by ATCP in which prestress is measured accurately and in real time during bolt preloading. Precompression control has been limited to torque control or by electrical charge storage, without due concern for the prestress absolute in pressure unit (MPa or ksi). 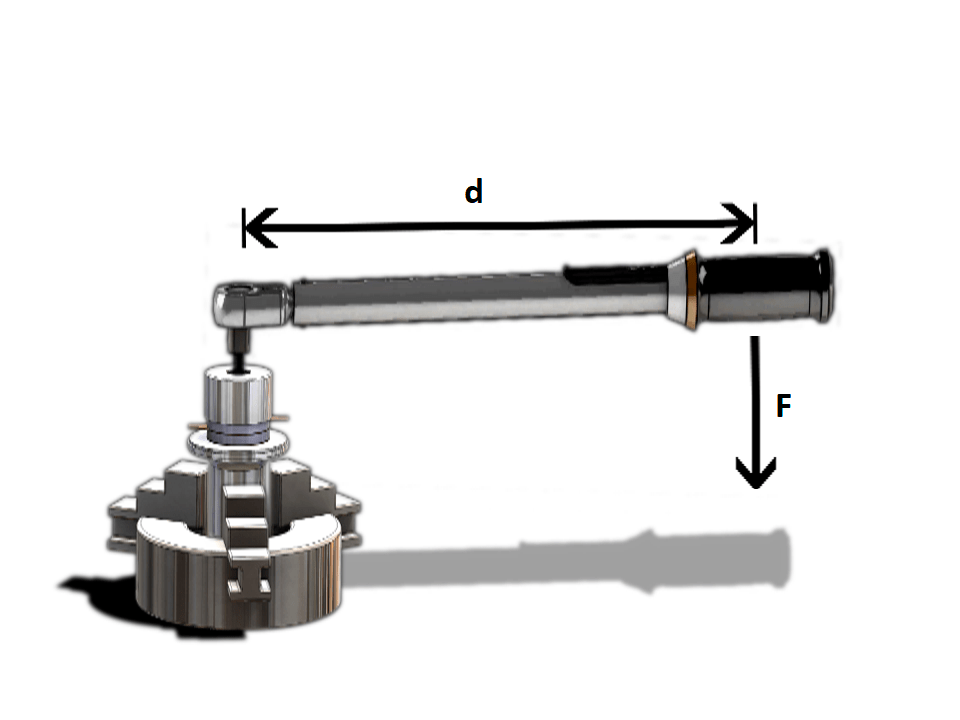 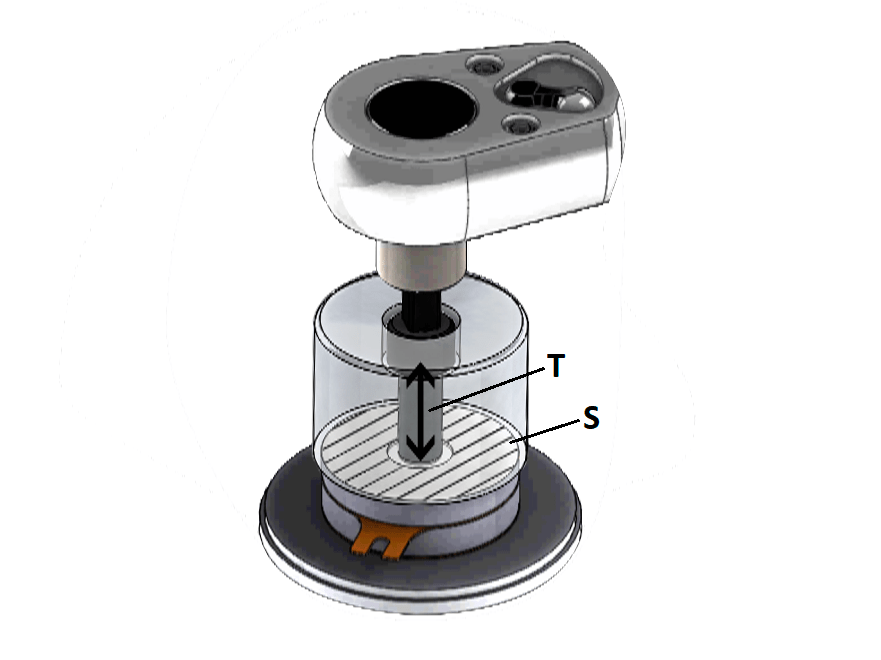 Torque is not the same as prestress. Torque is applied force (F) x distance (d) on the bolt and prestress is equal to the bolt traction force (T) divided by the rings’ cross-section area (S).

Prestress control based on torque is practical. However, it is indirect and inaccurate because the prestress x torque correlation depends on friction coefficients, which varies greatly with surface finishing, cleanness and lubrification. For example, if the bolt gets stuck because of threads’ issues, the prestress will be much lower than expected, despite the target torque being reached. 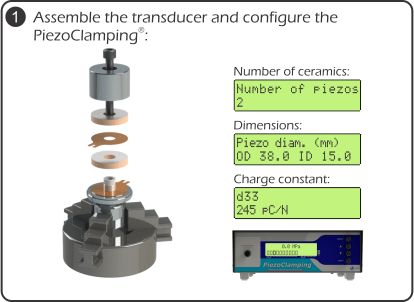 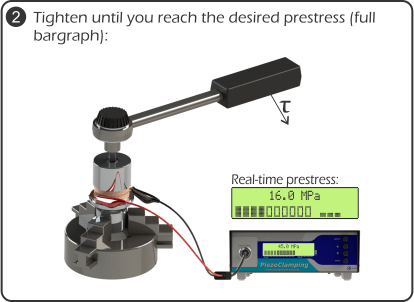 Connect the PiezoClamping® to the converter with the bolt loose, entry the ceramic’s parameters and apply the bolt preloading until the target prestress is achieved, as shown on the figures above. Preloading may be applied slowly and with pauses. Before assemble the transducer, ensure the interfaces, threads and metallic masses are clean, dry and non-lubricated. Only the bolt head seat can be lubricated to reduce the torque required to achieve the target prestress. PiezoClamping® must be set for the target prestress, speed, number of rings as well for the piezoelectric material charge constant.

To protect the bolt if it gets stuck because of thread issues or contaminations by epoxy bonding, use a torque wrench with the torque set to approximately 120% of the typical torque required to achieve the target prestress.

PiezoClamping® is also able to measure retained prestress by simply loosening the transducer bolt with it connected and properly configured.

Learn more about the PiezoClamping®