9) Does PiezoClamping® measure the average or maximum prestress on the ceramics?

FAQ: Regarding the target prestress required by the PiezoClamping®, does it represent the highest prestress level within the piezoelectric ring or the "average" prestress level since the pressure produced in the tightened thread is not evenly distributed among the PZT rings? Mr. F.L. 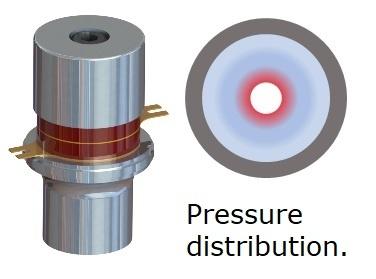 Typical pressure distribution on the piezo, the maximum is close to bolt and minimum to the edge.

The prestress measured by the PiezoClamping® is the average stress level in the ceramics. For typical Langevin bolt-type transducers, the prestress is greater next to the bolt and falls towards the outer diameter. For transducers with more than two ceramics, the prestress distribution is worse in the external ones (the ones in contact with the metallic masses) than in the inner pairs. The variation percentage depends on the device design and it is necessary to use FEA to predict it. Note: Converters design that uses stud plus nut improves the prestress distribution and is better than the standard Allen bolt.